Dangers of Opt-Out Legislation in Workers’ Compensation: Employees at Risk

In statehouses nationwide, corporate America is waging a robust campaign to pass legislation allowing companies to opt out of state workers' compensation laws and write their own rules.

This corporate barnstorming is finding favor among state lawmakers. In Texas and Oklahoma, many of the nation's biggest retail, trucking, health care, and food companies have taken advantage of the opt-out laws passed in those states. Tennessee and South Carolina are considering similar bills. And a coalition led by executives from Walmart, Nordstrom, and Lowe's is pushing to pass laws in up to a dozen states within the next decade.

As the movement to ditch workers' compensation has gained steam, there has been little scrutiny of what it means for workers. But recently, investigative journalists at ProPublica and NPR obtained the injury benefit plans of nearly 120 companies that opted out in Texas or Oklahoma, and compared them to state workers' comp. The analysis showed the employer-written plans virtually all have lower benefits, more restrictions, and almost no independent oversight.

The plans give employers almost complete control over the medical and legal process after workers are injured. Employers pick the doctors and can have

workers examined as often as they want. Workers must accept whatever settlement is offered or lose all benefits. If they wish to appeal, they can-to a committee formed by their employers.

The plans allow for a mishmash of provisions very different from state workers' comp. Unlike traditional workers' comp, which guarantees lifetime medical care, the plans cut off treatment after about two years. They don't pay compensation for most permanent disabilities and strictly limit payouts for deaths and catastrophic injuries. 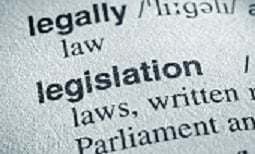 Supporters of the opt-out laws hail the corporate-written plans as not only cheaper for employers, but better for workers, too. In truth, this campaign was promulgated by and for big corporate employers to save them billions of dollars by taking workers' medical and legal rights away.

Workers comp was founded on the premise that employers owe a duty to injured workers and their families. Traditionally, laws in every state have required them to pay workers' medical bills and some of their lost wages until they recover-or for life, if they don't.

Opt-out laws aren't progress, but a regression to a century ago, before workers' comp, when workers and their families had to sue their employers or bear the costs of on-the-job injuries themselves.

As an American citizen, you have a duty to inform your state legislator of your concerns about reducing or eliminating workers' compensation coverage for workers. The effects of a work injury can be catastrophic. Not having adequate workers' compensation insurance coverage will be devastating to the injured worker and that worker's family.