Young Girl Hit By Car While Crossing the Street

In this tragic case of vehicle versus pedestrian, a little girl was crossing the street when she was hit by a car. Aside from suffering abrasions on her body, she endured a left femur deformity and sustained a traumatic brain injury. One by one, a presentation by the attorney, highlighted and labeled the listed injuries which included a displaced and angulated left midshaft fracture of the left femur with a three-centimeter shortening of the left leg, a left renal injury extending down to the left retroperitoneum, and a bibasilar dependent atelectasis of the lungs. She also sustained hemorrhagic contusions in several areas of the cerebral hemisphere, including the left cerebellar hemisphere and frontal lobes. Brain scans were shown to further aid in illustrating these brain traumas.  This resulted in a six figure settlement. 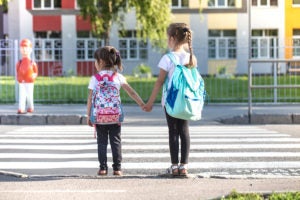