Supreme Court, missing a justice, considers a trucking case that could rattle the economy 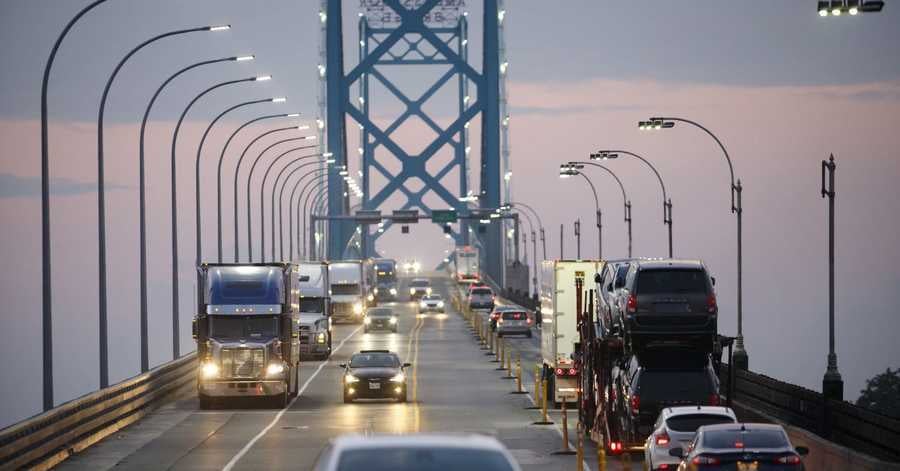 A closely watched case could saddle the industry with higher costs that could hit consumers and ripple throughout the economy.

Truckers got their day in court on Wednesday, as a not-quite-complete slate of Supreme Court justices weighed arguments in a closely-watched case that could saddle the industry with higher costs that could hit consumers and ripple throughout the economy.

In New Prime Inc. v. Oliveira, No. 17-340, the justices heard the case of Dominic Oliveira, a long haul truck driver who filed a suit against the transportation outfit New Prime three years ago, alleging that the company failed to pay him minimum wage and at times even charged him for working.

The case pits business interests against labor groups in the first major case of the term that could have consequences for hundreds of thousands of American workers and potentially millions of consumers. It could shape an industry that generates more than half a trillion dollars in annual revenue.

The case also raises questions about the use of the “independent contractor” designation to reduce pay and benefits for workers who perform essentially identical work as employees. On that front, the court's decision could have ramifications for virtually every sector of the economy.

It comes amid a bruising confirmation battle for Brett Kavanaugh, 53, whom President Donald Trump nominated in July to replace Anthony Kennedy, long considered the court's swing vote. Kavanaugh, if confirmed, would solidify a conservative, 5-4 majority on the nation's highest court for the foreseeable future.

To liberal court watchers, the case, the first in a trio of arbitration suits set for argument this term, typifies the potential damage that a conservative court could do to American workers.

In a dramatic brief filed with the court in July, Sen. Sheldon Whitehouse, D-R.I., invoked the Declaration of Independence and Niccolo Machiavelli, the Renaissance-era author of influential political treatise “The Prince.”

The lawmaker argued that the case was part of a “sustained attack by corporations and billionaires, and by the front groups they stand up to mask their identities in this effort.”

Oliveira's attorneys called New Prime's warnings “an imaginary parade of horribles” in a filing that month.

The case turns on whether Oliveira was properly categorized as an independent contractor, and, if so, whether he is entitled to a court hearing on his claims or if he must submit to arbitration. Arbitration is generally preferred by employers as a more efficient dispute resolution mechanism, although critics say it can serve as a shield for unfair corporate practices.

At issue in the case is the meaning of the nearly 100-year-old Federal Arbitration Act, which exempted certain types of transportation workers from mandatory arbitration agreements. Specifically, the law exempts “contracts of employment.” Much of the battle being waged is whether, in 1925, that phrase would have included independent contractors or only employees.

While it is not possible to guess how a justice will vote based on their questions at oral argument, the court's traditional conservatives seemed skeptical of the trucking company's argument that “contracts of employment” only applied to employees.

“Simply because someone would be considered or not considered an employee doesn't necessarily answer the question of whether it's a contract of employment,” Chief Justice John Roberts said to the attorney for New Prime, Theodore Boutrous, Jr., on Wednesday. “People think naturally of employing an independent contractor.”

Justice Neil Gorsuch, Trump's first appointee to the court, asked Boutrous about “the fact that” there was “a lot of historical evidence at the time of the statute in question that ‘contract of employment' may have swept more broadly?”

If independent contractors are exempt from the FAA, the knock-on effect for the trucking industry and the economy overall could be significant. Given other headwinds facing the transportation industry, like capacity shortages and trade war fears, the worry is that consumers could see an increase in prices of “10, 15, 20 percent,” according to J. Bruce Chan, a vice president and senior analyst at Stifel Capital Markets, who covers logistics firms.

The industry has seen a shortage in drivers get worse year after year, as low wages have failed to attract new entrants to a notoriously difficult job that can involve being on the road for weeks or months at a time.

Some trucking companies have started offering higher wages and bonuses. In an industry with slim margins, many firms have turned to independent contractors, who can cost firms as much as 20 percent less in wages, benefits and other costs than employees, according to Chan.

Some of those independent contractors represent small fleet owners looking to build their own trucking business by contracting out to multiple firms, though that model has been on the decline since the 1970s.

In this case, Oliveira has argued that he was mis-classified, because his work was “substantially identical to the job responsibilities of employee drivers.” New Prime dictated Oliveira's schedule, vacations, home time, and monitored his vehicle with an electronic tracking device.

Some justices seemed skeptical that an employer could avoid a court hearing on a dispute by classifying a worker as an “independent contractor,” even if the work they did was similar to the work done by traditional employees.

Justice Sonia Sotomayor, who was appointed by President Barack Obama, asked Wednesday if there was “any other area of law where we take the party's label, 'employee' versus ‘independent contractor,' and give it binding effect?”

“Your Honor, I can't think of one,” said Boutrous, the attorney for New Prime.

“We are ultimately looking at the inability of goods to move, or at least a significant increase in cost to consumers,” Chan said. “Target, Walmart, a mom and pop trinket store selling porcelain goods on their web store, they are all going to see an increase in costs from truckers, and eventually that will get passed along to the consumer.”