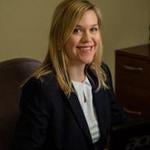 Brianne Rohner Erickson is a trial attorney and associate at Brock Law Offices, P.C., L.L.O., where her practice is primarily dedicated to representing injured individuals in the areas of workers' compensation and personal injury. Ms. Rohner Erickson earned her law degree from the University of Nebraska College of Law and she is licensed to practice before Nebraska's state and federal courts. She is a member of the Nebraska State Bar Association, and Nebraska Association of Trial Attorneys.

Ms. Rohner Erickson grew up in York, Nebraska. She graduated from Nebraska Wesleyan University in 2006 with a Bachelor of Arts degree in History. She was also a member of Delta Zeta Sorority and received an award from a prominent international attorney, as the most outstanding graduate with a history major. Ms. Rohner Erickson spent four years practicing workers' compensation and personal injury law at another Lincoln firm and joined Brock Law Offices in October 2015.

She recently finished her last term after nine years as a member of the board of directors of the Mental Health Association of Nebraska, where she served as Secretary and Vice Chair of the Executive Board.